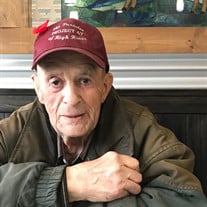 Oliver Perry a High River Legend passed away peacefully on February 25, 2019 in High River at the age of 99 years. Oliver was born on July 12, 1919 in Kamloops, B.C. to parents Harold and Lydia Perry. He was raised in Kamloops, Elnora and Banff, along with his sister Rose and brother Dallas, before settling in High River where he called home for 80+ years. Oliver was a man of experience from life guarding on the Highwood River to driving bus on Vancouver Island during WWII, welding for the MD of the Foothills and fighting fires in High River, just to name a few. All which made for his unique story telling ability. Oliver was a genuine man full of integrity, hard work, kindness, and determination! His handshake was his word and the twinkle in his eye said it all. Oliver was a large part of the history of High River. He drove the first fire truck in the town of High River and was the first paid Fire Chief starting in 1975 for the next decade, volunteering many years prior to that role. Oliver was recognized during the Project 47 initiative in 2017 with the restoration of his 1947 fire truck. He was part of the growth and improvement of the community of High River from early on and his legacy will live on! Oliver is survived by his extended family and many friends. Oliver was predeceased by his parents Harold (1963) and Lydia (1982); loving wife Mildred (2008); sister Rose (2009) and brother Dallas (2011). The town of High River has lost a true hero. He would want to say “thank you kindly” for all the support given to him over the years. A special thank you to all the caring and compassionate doctors and nurses from the High River Hospital, who took such great care of Oliver. A Celebration of Oliver’s life will be held Saturday, April 13, 2019 at 1:00 p.m. at the Highwood Golf & Country Club (400 - 7th Street NW), High River, AB. Oliver loved children, in lieu of flowers, memorial donations may be made in Oliver’s memory to the Alberta’s Children’s Hospital, 28 Oki Drive NW, Calgary, Alberta, T3B 6A8. Caring for the family is Lyle Reeves Funerals of High River (Craig Snodgrass) 403.652.4242.

Oliver Perry a High River Legend passed away peacefully on February 25, 2019 in High River at the age of 99 years. Oliver was born on July 12, 1919 in Kamloops, B.C. to parents Harold and Lydia Perry. He was raised in Kamloops, Elnora and Banff,... View Obituary & Service Information

The family of Mr. Oliver Lewis Perry created this Life Tributes page to make it easy to share your memories.