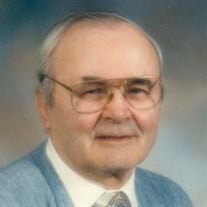 Orest passed away peacefully at High River Hospital with his family by his side, after 23 years of dealing with the effects of Guillain-Barré Syndrome. He will be greatly missed by his loving wife of 59 years, Frances (nee Zutter), his two daughters, Susan Lukey (& David Robertson of High River) and Donna Wiebe, and his grandchildren, Scott & Christy Wiebe, Ryan Wiebe, Jason Wiebe, Jessica Wiebe, Micah Lukey-Robertson and Noah Lukey-Robertson, as well as his two dear great-grandchildren, Ben & Ava Wiebe. Also remembering him in love are his sisters, Vera (& Winston) Wylie of Marmora, Ont. and Doris (& Albert) Plett of Winnipeg, Man., brother Metro (& Gwen) Lukey of Chetwyn, B.C., sister-in-law Virginia (& Len) Bertram of Calgary, brother-in-law Ron Gordon of Athabasca, Alta, life-long friend Wilton Carol of Claremont, Alta., and many, many nieces and nephews to whom he was a favourite uncle. Orest grew up in Canora-Norquay, Sask. living with caring aunts and grandparents Lukey & Nahnybida after the early death of his mother. Starting at age 14, he worked many years on the Rutledge Ranch near Monitor, Alta., before finding his way to Acme, Alta., where he worked for the Greenway family and met the love of his life, Frances, at her Grade 12 Christmas prom. They made their home first in Swalwell, Alta. where Orest worked for the Fytens, before settling on the farm where Frances was born and raised at Bircham, Alta. near Acme. One of Orest’s great accomplishments was being able to own his own farm, where grain, cattle, chickens and eggs were the main stays. In May 2013, Orest & Frances moved to High River, where they have enjoyed getting to know their new community. Orest lived his life giving to others and was a great volunteer, participating in many community organizations such as the United Church, Elks, Masons & Scouts and committees such as for the Acme Swimming Pool, the Library & the Golf Course. He founded the Acme Food Bank, and offered many years of service on the Canadian Egg Board and for the Calgary Stampede. He was always helping out in some way in the Acme community and beyond. He loved his experiences of volunteering with the 1988 Olympics in Calgary and working for 2 years on the ranch at Heritage Park, especially enjoying giving wagon rides to visitors with black Percherons, Sonny & Duke. He was a proud Ukrainian, an avid Saskatchewan Rough Riders fan, a master builder of parade floats, a superb carpenter, always inventive and creative as well as a lover of music (playing the harmonica), scotch, chocolate and games of crib and solitaire. If Orest were writing this, the first thing he would do would be to express his gratitude to Frances, his family, his friends and all of the homecare workers, Adult Day Program folk, doctors, nursing staff, clergy and others who cared for him through the years. Frances and all of the family join in saying, “Thank you” to all who were part of Orest’s journey. Orest will be remembered for his generousity, his sense of humour, his big smile, his great strength of character, his wisdom, his unconditional love and acceptance, his deep commitment to his family and friends. He faced many difficulties in life, but out of it all created a good life for himself and, more importantly to him, for his family. He will be greatly missed by his family as well as the many, many friends he made along the way. Be at peace, Orest – you’ve earned it! A funeral service was held on Tuesday, December 29th at the High River United Church, with cremation following. At a later date, a graveside service and luncheon will be held in Acme, to which the community is invited. In lieu of flowers, donations are invited to one of the following: Elks & Royal Purple Fund for Children (www.elks-canada.org) 1st High River Scouts (Box 5067, High River, AB T1V 1M3) Acme United Church Memorial Fund (Box 293, Acme, AB T0M 0A0) High River United Church Memorial Fund (Box 5520, High River, AB T1V 1M6) To send condolences and view Orest’s Tribute Page please visit www.lylereeves.com . Caring for the family is Lyle Reeves Funerals of High River (403.652.4242).

Orest passed away peacefully at High River Hospital with his family by his side, after 23 years of dealing with the effects of Guillain-Barré Syndrome. He will be greatly missed by his loving wife of 59 years, Frances (nee Zutter), his two daughters,... View Obituary & Service Information

The family of Mr. Orest Ernie Lukey created this Life Tributes page to make it easy to share your memories.

Orest passed away peacefully at High River Hospital with his...