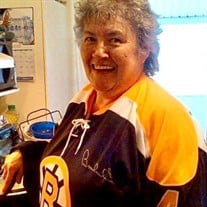 It is with heavy hearts that we announce that Patricia (Pat) Ellen Lois Gardner (nee Barnes) passed away after a short battle with cancer on January 29, 2022 in High River, AB at the age of 67 years. Pat was born in Ohsweken, Ontario on July 2, 1954 to Marion and Edgar Barnes, and was the 7th of eight children. When Pat was five, she moved from Ontario to Creston, BC with her family and called the Creston Valley home for the next 61 years. As a teen, Pat was an avid hockey fan. While other girls her age were swooning over popular musicians, Pat was absolutely smitten with Boston Bruins player Bobby Orr. She was lucky enough to meet her idol and get a belated birthday kiss on the cheek from #4 himself when he was the special guest at a homecoming dinner for Johnny Bucyk on July 3, 1971. Even though Pat swore that she’d never wash that cheek again, #4 soon became a memory when she met the love of her life, Gordon Elias Gardner. Gordon and Pat were married on June 30, 1972 and three years later, they welcomed daughter Karen, who was their pride and joy. Pat was an amazing cook and baker and loved canning all the fruits and vegetables that grew from her and Gordon’s abundant garden. When not watching hockey or cooking up a storm, Pat could be found watching curling, reading Danielle Steel novels, listening to country music or losing badly at cards. Pat is predeceased by her parents Marion and Edgar, her husband Gordon, and her older brothers Paul and Thom Barnes. Pat is survived by her daughter Karen Finnan, son-in-law James Finnan, grandsons Alexander & Seamus Finnan, siblings Carol (Rod) Nelson, Barb Barnes, Deb Scott, Jim (Wendy) Barnes and Ken (Pat) Barnes and step-son Jim Gardner. She will also be lovingly remembered by her many wonderful friends who were like family. In keeping with Pat’s wishes, no funeral will be held. In lieu of flowers, friends wishing to make a memorial contribution may do so to the Creston Pet Adoption and Welfare Society (PAWS, 2805 Lower Wynndel Rd., Creston, B.C. V0B 1G8.), or via etransfer to [email protected] Caring for the family is Lyle Reeves Funerals of High River (Craig Snodgrass) 403.652.4242.

It is with heavy hearts that we announce that Patricia (Pat) Ellen Lois Gardner (nee Barnes) passed away after a short battle with cancer on January 29, 2022 in High River, AB at the age of 67 years. Pat was born in Ohsweken, Ontario on July... View Obituary & Service Information

The family of Mrs. Patricia Ellen Lois Gardner created this Life Tributes page to make it easy to share your memories.

It is with heavy hearts that we announce that Patricia (Pat)...