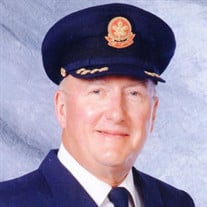 We are deeply saddened to announce that Paul Herbert Linstead, beloved husband of Deanna and brother of Lois (Irvine) passed away peacefully in High River Long Term Care on Saturday, May 9, 2020 at the age of 83. Paul was born in Port Hope, Ontario on December 5, 1936 to Herbert and Alice Linstead. He was the eldest in the family which included his sister, Lois. As the children of a United Church Minister, they lived in a variety of different places in Ontario as was the custom of the time. Paul attended school in Courtice, Paisley and Niagara Falls, Ontario. At an early age, Paul focused on the desire to become a pilot and was able to enlist in the Royal Canadian Air Force on his 17th birthday. He realized his dream and became Flight Lieutenant before leaving the Air Force 10 years later in 1964. He was accepted as a pilot for Air Canada and remained there from February 1965 to Dec. 31, 1991 having reached his Captaincy in 1972. He lived in several locations around the world and many locations in Canada and flew on virtually all the routes of the airline and their different planes operative at that time. He was also able to fulfill his love of travel, a family trait. After his first marriage dissolved, he met his lifelong soulmate Deanna Clifford and was married from October 1974 to his passing. Paul was a relatively quiet, confident, and generous man but enjoyed whatever community he was in actively. He and Deanna became part of various social and sporting groups especially golf and skeet shooting but also making individual friends and maintaining regular contact with friends from past years and family. His shooting prowess earned him a qualification for the Olympics but at a time when his career was most important. Paul was a social man and had many intriguing stories to tell. Dinners and get togethers were enlivened by them and he will be greatly missed by his family and many friends from his career and his communities. While his activities were curtailed in later years due to a severe disabling fall in December 2017, he demonstrated a very positive attitude, recovered to a remarkable degree and had many times of much enjoyment. Special thanks to the caregivers at High River Long Term Care, his therapist and participating friends who helped this to happen and to Rev. Sean Devlin of High River Anglican Church, a constant comfort. Due to current restrictions no services will be held at this time. A memorial service will be held later as can be scheduled. In lieu of flowers, donations in his memory may be made to your local Food Bank. Farewell dearest husband, brother, and friend. Caring for the family is Lyle Reeves Funerals of High River (Craig Snodgrass) 403.652.4242.

We are deeply saddened to announce that Paul Herbert Linstead, beloved husband of Deanna and brother of Lois (Irvine) passed away peacefully in High River Long Term Care on Saturday, May 9, 2020 at the age of 83. Paul was born in Port Hope,... View Obituary & Service Information

The family of Mr. Paul Herbert Linstead created this Life Tributes page to make it easy to share your memories.

We are deeply saddened to announce that Paul Herbert Linstead,...