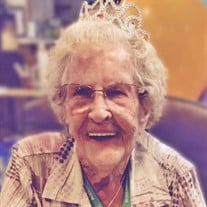 Pearl Elvie Garner, 96, passed away Monday, October 25, 2021 at the High River General Hospital in High River, Alberta. Born in Unity Saskatchewan to Hillwood and Elvie St. Germain. She married Lawrence Robert Garner (deceased), on March 14, 1946 and was married for 41 years. Sister to seven siblings, six deceased and one surviving. Mother to eight children, three of whom passed away in infancy, Beverly, Dwayne and Myron. Surviving children and grandchildren are Lorraine (Larry) and their children Derek (Liesle), Michelle (Darren), Travis, Angela (Alfred), and Rik (Julie), Raymond (Sharon) and their children, Laureen (Roy), Kevin (Rebecca), and Darell (Janet), Elaine (Norm) and their children, Mike, Cara (Chris),and Jon (Christie), Randall (Nancy) and their children, Christa (Ryan), Amanda (Adlee), Geoffrey (Odette), and Darren (B.J.) and their child Ariel Rain. Pearl resided in Calgary for the past 16 years. Together with Lawrence, she was a business owner in St. Walburg, Saskatchewan, worked in construction, and farmed outside of Edmonton, Alberta. Pearl lived a long and full life, living on her terms independently until the last seven weeks of her life. She was an inspiration for her hard work and determination. A private family memorial will be held in the spring of 2022 after which her ashes will be spread in the mountains, as was her request. Caring for the family is Lyle Reeves of High River (Craig Snodgrass) 403-652-4242.

The family of Mrs. Pearl Elvie Garner created this Life Tributes page to make it easy to share your memories.