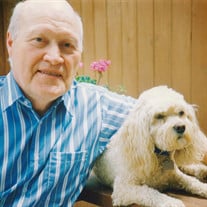 Peter McCartney, beloved husband, father, grandfather and great grandfather passed away at the High River Hospital on Tuesday October 12th at 93 years of age. Born on August 10, 1928 in Saskatoon, Peter was the fifth child born to Peter and Jennie McCartney (Hooper). He attended Princess Alexandra School and Saskatoon Technical Collegiate. The family spent their summers at Watrous and later at Waskesiu. Growing up he was involved with the YMCA, Sea Cadets and enjoyed playing sports of all kinds, his favourite being football. In high school he was named to the High School Allstar Team along with his pal Bill Diduck where they were known as the "deadliest pass receivers" and were league champions. Peter followed family tradition into military service joining the Royal Canadian Navy in 1948. He served on the HMCS Cayuga, a Tribal Class destroyer, which left Esquimalt on July 5th, 1950 bound for Pearl Harbour. Under the command of the United Nations Forces Korea, the ship arrived in Sasebo, Japan on July 30th where they took part in numerous missions including the Chinnampo evacuation. After almost 10 months at sea the Cayuga returned to Canada in April 1951. Lifelong friendships had been formed and attending Naval reunions was a highlight for Peter. Following his return to Saskatoon, Pete worked a number of different jobs before moving into the oil and gas industry with Union Carbide and then Baroid. Peter’s work took him to Northern Alberta where he worked in the Sexsmith area. There he met and married his wife of 64 years Heather Cameron. Pete's work took them from rigs in the swamps near Lake Charles Louisiana, to Vernal Utah, to the remote bush around Fort Nelson, B.C. Pete was on the discovery well for the Swan Hills field. He had great stories about those early years in oil and gas which were a little like the 'wild west', living in small northern communities, the mud, the cold and the 'interesting' characters. Pete eventually came to work for Milchem Canada and made the move to Calgary where he was the Regional Distribution Manager until 1986. He obtained a Business Administration Diploma from Mount Royal in 1967. Pete and Heather had two children, Melissa and Cameron and in 1967 they bought a new home in the community of Maple Ridge where they resided until 1995. Those years were filled with summers in the Okanagan, trips to visit family and a busy social calendar. Pete and Heather enjoyed Stampeder games, Bingo at the 400 Club, long lunches, good friends and for Pete there was always time for a good cigar. Pete enjoyed wood working as his father had. He finished several basements and passed on his knowledge to his son and his son in law. He spent a lot of time working on projects in his shop, which was always well equipped and very organized. Pete also enjoyed crosswords and preferred the more challenging New York Times puzzle, He loved his dogs, he always had one by his side and he faithfully walked them every day. Pete had a lifelong interest in all things military with a special interest in planes. His older brother had been in the RAF during WWII. He was able to obtain his pilots licence and flew a Piper Cub 180 and at one point was a passenger on the plane when the ski broke through the ice and caused them to crash near Valleyview. Pete spent the final years of his working life at Revenue Canada and on retirement Pete and Heather moved to the High River Community of Polo Park. They enjoyed living in a smaller community , there were social activities at the clubhouse with neighbours and Pete, like his mother, continued to swim at the local pool until well into his 80's. Anyone visiting them was treated to lunch on the train while grandchildren had outings at the Bar U Ranch. Pete is survived by his wife Heather, his daughter Melissa (Scott), son Cameron (Michelle), son Robert North (Lori) and his grandchildren Joel (Helen), Chelsea, Andrew and Jordan Culver, Myla (Everett), Alayna and Kaylie McCartney, Brian (Kathleen) and Alexander North, two great grandchildren, Alfie Ru Culver and Aurora North and his sister Dorothy Dougans. There will be a private family Celebration of Life at a later date. In lieu of flowers, donations in memory of Peter may be made to the Heaven Can Wait Animal Rescue Foundation [email protected] Caring for the family is Lyle Reeves Funerals of High River. (403.652.4242)

Peter McCartney, beloved husband, father, grandfather and great grandfather passed away at the High River Hospital on Tuesday October 12th at 93 years of age. Born on August 10, 1928 in Saskatoon, Peter was the fifth child born to Peter and... View Obituary & Service Information

The family of Mr. Peter Joseph McCartney created this Life Tributes page to make it easy to share your memories.