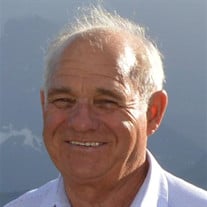 Peter John Niemans of High River, Alberta passed away surrounded by his family at the High River Hospital on October 1, 2015 at the age of 74 years. Peter was born on January 12, 1941 in Maasdam, Netherlands to Cornelia and Johannes Niemans. They immigrated to Canada as a family in 1952. Peter began working in the seismic industry when he was 18, and quickly climbed the ranks to crew manager and eventually owned his own seismic drilling company. During this time he met his wife Kathy, while working in Peace River. They settled in High River, and with a desire to be closer to home, in 1971 Peter transitioned into drilling water wells in the High River/Foothills area. He formed his own company and worked in this field until his retirement earlier this year. Peter was an important figure in the development of the Alberta Water Well Drilling Association and served on the board of directors for several terms. He was also instrumental in the creation of the apprenticeship program for water well drillers. Peter and Kathy bought a farm near High River in 1975 where they laid down their roots, farmed the land, and raised their 3 boys. A dedicated parishioner of St. Benedict’s Anglican Church, Peter always enjoyed his grandchildren, friendships, travelling, supporting his kids’ endeavours, the love of his wife, and his never ending list of things to do on the farm. Peter is survived by his loving wife Kathy; sons Troy (Tanya Ryan), Michael (Kim), Doug (Melissa); grandchildren Olivia and Taylor; his mother Cornelia Niemans, brother Hans (Colleen), and sister Mary Ann (Shane). Peter is predeceased by his father Joseph and brother Bill. In lieu of flowers, memorial donations may be made to the High River Community Cancer Centre (560 – 9 Ave, High River, AB T1V 1B3). A funeral service will be held on Thursday, October 8 at 2:00 p.m. at the High River Full Gospel Tabernacle (1802 – 9 Ave SE). To send condolences and view Peter’s tribute page please visit www.lylereeves.com. Caring for the family is Lyle Reeves Funerals of High River (403) 652-4242.

Peter John Niemans of High River, Alberta passed away surrounded by his family at the High River Hospital on October 1, 2015 at the age of 74 years. Peter was born on January 12, 1941 in Maasdam, Netherlands to Cornelia and Johannes Niemans.... View Obituary & Service Information

The family of Mr. Peter John Niemans created this Life Tributes page to make it easy to share your memories.