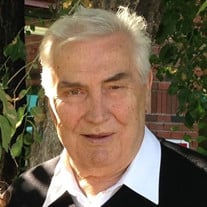 Mr. Peter Tychkowsky of High River, Alberta passed away on December 6, 2019 at the South Calgary Health Campus at the age of 79 years, with his family and grandchildren at his bedside. Peter is survived by his wife Marian; sons Clayton (Debbie) Tychkowsky of Calgary; Kevin (Kim) Tychkowsky of High River; Robert (Keri) Tychkowsky of Calgary and his grandchildren Sara; Julie; Mackenna and Nicholas, all of Calgary. He is also survived by his sister Darlene (Ken) Wolansky of St. Albert; sister Marilyn (Tony) Borchuk of Smoky Lake and brother James Tychkowsky of Egremont in addition to many nieces and nephews. Peter is predeceased by his father Steve Tychkowsky; mother Ann (Schur) Tychkowsky; brother Russell Tychkowsky; sister Rose Prochinsky; sister Emily Chichak; brother Victor Tychkowsky; brother David Julian Tychkowsky and brother Orest Tychkowsky. As husband to his wife Marian and father to his sons, Peter lived a life filled with laughter and joy, in doing so he forever imprinted his love in the hearts of his family. Born November 16th, 1940 in Lamont, AB Peter enjoyed growing up on the family farm with his 9 siblings. It is through these early years that he developed a love for the outdoors. His passion for fishing and camping would be something he would pass on to his sons. In 1963 he married the love of his life, Marian Zawaduk and together they raised three sons. He was always proud of his Ukrainian heritage but was equally proud that his grandchildren would become 4th generation Albertans. Studying to become a heavy-duty mechanic, in 1967 Peter graduated from the Northern Alberta Institute of Technology. After completing four years of apprenticeship, he was given a special award from the Alberta Apprenticeship Board sponsored by the Poole Engineering Company. The award was in recognition of Peter’s integrity, interest, leadership qualities, as well as his scholastic ability and workmanship. It was these same qualities that would later see Peter become Area Manager for Alberta Transportation and enjoy a career that spanned well over 30 years. Peter believed in supporting the needs of his community. After living in Smoky Lake, AB from 1964 to 1972, he re-located his family to Lac La Biche, AB. It was here that he served two terms as town councilor. He later moved his family to St. Paul, AB from 1980 to 2006 where he once again served three terms as town councilor and two terms as a school trustee. In addition to an interest in civic politics, Peter became an active Elks of Canada member where he volunteered many hours to serve the needs of his local community. In recognition of his contribution to Elks of Canada he was appointed exalted ruler for his local lodge. Peter was a man of faith who retained his heritage through membership in the Ukrainian Greek Orthodox Church and served as president of the Kiev’s K Hi district youth camp. In 1996 Peter retired and remained in St. Paul, AB until 2006 when he and Marian moved to High River, AB. In his retirement Peter remained an active member of senior clubs in St. Paul, High River and Okotoks. Peter will always be remembered as a man who was compassionate to others, one who was joyful, and one who fiercely protected his family. He taught his sons the value of hard work, loyalty, integrity and the importance of standing up for those who could not stand for themselves. But more important he taught his sons to continually explore and push themselves to learn more, as he demonstrated by earning his pilots license and purchasing a small Cessna aircraft many years ago. His sons will be forever grateful and will continue to honor those values he instilled – he will be deeply missed. The Tychkowsky family wish to thank Dr. Kapusta and the medical team at the High River General Hospital for the care they provided Peter. The family is especially grateful to the doctors, nurses, and other medical professionals at the South Calgary Health Campus who showed tremendous compassion towards Peter and his family during the final days and hours of his life. If desired memorial donations may be made to Diabetes Canada in Peter’s memory. A Funeral Service was held on Monday, December 16th at 1:00 p.m. at St. Benedict’s Anglican Church in High River (602 – 3rd Street W). Visitation will be made available to Peter’s family and friends from 10:00 a.m. to 12:30 p.m. at Lyle Reeves Funerals (140 6th Ave. SW) located directly across the street from the church. Caring for the family is Lyle Reeves Funerals of High River (Craig Snodgrass) 403.652.4242.

Mr. Peter Tychkowsky of High River, Alberta passed away on December 6, 2019 at the South Calgary Health Campus at the age of 79 years, with his family and grandchildren at his bedside. Peter is survived by his wife Marian; sons Clayton (Debbie)... View Obituary & Service Information

The family of Mr. Peter Joseph Tychkowsky created this Life Tributes page to make it easy to share your memories.