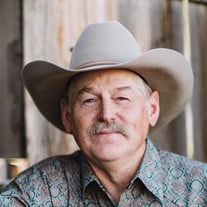 Mr. Quenten Barrett of Nanton, AB passed away peacefully at home on September 15, 2019 at the age of 62 years. Quenten is survived by his wife Sherri; sons Timber and Riley and daughter Kacey; parents Sandy and Beth; brothers Darcy (Verlaine) and Wyatt (Laura); sister Dallas (Rod); and numerous nieces and nephews. Quenten was born in High River, AB, and resided in the area between High River and Claresholm throughout his school years. After graduating, Quenten hit the road and worked for a time in the oil patch, but only when he wasn’t following his true passion as a Guide for Big Game Hunters. Guiding for White Tail Deer, Big Horn Sheep, Caribou and other big game took him to areas throughout northern Alberta and BC, and the North West and Yukon Territories. It was during this time that he met Sherri, he hung up the trail pack and they settled down to raise their family in the log home that he crafted east of Cayley. They moved their clan to their current home southwest of Nanton in 2001. Quenten was an avid, hunter, fisherman and outdoorsman throughout his entire life. In his down time, he let his artistic side show, sketching and drawing wildlife. He was talented with a chainsaw and a scribe, crafting custom log homes and restorations throughout southern Alberta. Quenten always had a story to tell, or an idea for ‘how we could do that better'. Memorial Donations can be made to the High River District Health Care Foundation, 560 – 9th Avenue S.W., High River, AB T1V 1B3, www.highriverhealthfoundation.ca. A Memorial Service was held on Thursday, September 19 at 2:00 p.m. at the Nanton Memorial Community Centre, 2204 – 18th Street, Nanton, AB. Caring for the family is Lyle Reeves Funerals of High River (Craig Snodgrass) 403.652.4242.

Mr. Quenten Barrett of Nanton, AB passed away peacefully at home on September 15, 2019 at the age of 62 years. Quenten is survived by his wife Sherri; sons Timber and Riley and daughter Kacey; parents Sandy and Beth; brothers Darcy (Verlaine)... View Obituary & Service Information

The family of Quenten Lawrence Barrett created this Life Tributes page to make it easy to share your memories.