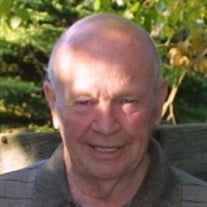 Conceived as a mistake by Fred and Minnie Tanner in the midst of the Dirty Thirties, arrangements had been made to have their fifth child adopted by one of Fred’s sisters. Fortunately, that plan went awry upon Richard Donavon Tanner’s arrival into the world on May 2nd, 1935. According to his mom, he was just far too cute and cuddly to be given away. Fred and Minnie devoted their lives to providing comfort and happiness for their family. As the baby of the litter, Donavon was the chief benefactor of their love and generosity. His only regret is never having taken time to acknowledge the fact. During his school years, Donavon was an enthusiastic participant in various team sports. Starting at age 14, he skipped the zone representatives in Southern Saskatchewan high school curling playdowns for three consecutive years. Also commencing at age 14, he quarterbacked the Moosomin Mustangs football team for four years, culminating with the Eastern Saskatchewan championship in 1951. Together with the rest of his family, he was an avid fan of the Saskatchewan Roughriders and hitch-hiked to Regina on more than one occasion in his early teens to attend Rider games. As the old married man of the squad, Donavon was captain of the Elks’ Juvenile hockey team which won the provincial hockey championship in 1952-53. He played third-base with the junior baseball team and was a keen member of the Moosomin golf club. He also spent many hours in competition at the tennis court which was situated kitty-corner to the Tanner house at the corner of Mark Avenue and Main Street. He was also said to have spent many a night sleeping on one of the tables at Turk Kilborn’s pool hall. Golf remained an avocation in Donavon’s life for many years. He got hooked on the game at an early age during summer vacation with the family at Kenosee Lake. He assisted with the original design and construction of the Moosomin golf course in the late 40’s and joined forces with Wilf Walker and Chuck Vanson to establish the Esterhazy golf course in the late 50’s. He was an active member of the Highwood Golf and Country Club in High River for many years and was heavily involved in the club’s conversion to grass greens. A life-long dream was realized in the 80’s when he designed the original concept for the Cottonwood Golf Course in the Bow Valley southeast of Calgary. Donavon’s newspaper career was launched at age 13 when his mom obtained an after-school job for him at the Moosomin World-Spectator. He became a full-time employee at the Spectator office when he was united in marriage with Fay Bradley on October 12th, 1952. The family pulled up stakes in 1955 and ventured west to Alberta where Donavon joined the staff of the Olds Gazette as a typesetter/compositor. They returned to Saskatchewan in 1956 when Donavon took over as publisher/editor of the Esterhazy Observer at the ripe old age of 21. The Tanners returned to Alberta in the spring of 1960 when Donavon became production foreman at the High River Times. Donavon took over as publisher/editor of The Times when he acquired the business from Charles Clark in 1966. Thirty years of newspapering came to a conclusion for Donavon when he sold The Times to the partnership of his son Glenn and Bill Holmes in 1978. While publishing The Times, Donavon served as president of the Alberta Weekly Newspapers Association and was member of the founding committee of the Canadian Community Newspapers Association. He also served as a director with Western Regional Newspapers. In 1977, Donavon assisted Golden West Broadcasting Ltd. of southern Manitoba in establishing the CHRB radio station in High River. He served as a member of the board of directors for the station for several years. Following retirement from the newspaper, Donavon and Fay spent six weeks touring the Deep South and other areas of the United States in the spring of 1978. They then took up residence for a year at Kalispell, Montana before returning to High River where Donavon became a member of the maintenance staff of Highwood Golf Club for six years. After taking a year off to do the design work for Cottonwood Golf Course, he returned to the Highwood club where he was employed as bartender for several years. Donavon returned to the printing and publishing field in 1998 when he commenced research, editing and composition for the production of The Best of Times – a series of hard-cover books pertaining to the history of High River and district as chronicled by The Times. The fifth and final volume of the series was released in December of 2003. Donavon also went on to publish a “History of High River Floods” as well as two (one Tanner & one Bradley) family history books. Don will be lovingly remembered by his sons Glenn (Fran) and Tim (Sherri); grandchildren Jordan (Heather), Nick (Amanda), Jeremy (Ashley), Lindsey (Chris), David, Dena, Devyn and Landyn; as well as numerous great-grandchildren, nieces and nephews. Don was predeceased by his wife Fay and son Greg. He dearly loved, and was very proud of his children, grandchildren and great-grandchildren. During his last days he was always grateful for those “wonderful people” looking after him, in particular, the staff and volunteers at the High River Hospital and the staff at Season’s Retirement Home. In lieu of flowers please consider a donation in his honour to the Narrow Road Home Women’s Recovery Home in High River (36 – 2nd Ave. SE, High River, AB, T1V 1G5) www.narrowroadhome.com or to the High River and District Health Care Foundation (560 – 9th Ave. SW, High River, AB T1V 1W4) www.highriverhealthfoundation.ca . Caring for the family is Lyle Reeves Funerals of High River (Craig Snodgrass) 403.652.4242.

Conceived as a mistake by Fred and Minnie Tanner in the midst of the Dirty Thirties, arrangements had been made to have their fifth child adopted by one of Fred&#8217;s sisters. Fortunately, that plan went awry upon Richard Donavon Tanner&#8217;s... View Obituary & Service Information

The family of Mr. R. Don Tanner created this Life Tributes page to make it easy to share your memories.

Conceived as a mistake by Fred and Minnie Tanner in the midst...