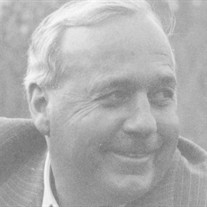 Bruce Laing was sometimes referred to as "The Dour Scot" by his family because, despite being born on a small farm near Wapella, Saskatchewan, and having never actually visited Scotland, he had all of the celebrated and sometimes frustrating aspects of his Scots ancestors. He was stubborn. He never admitted defeat. He appreciated frugality, both of economy and emotion. He could be downright cantankerous. And his clan was everything to him. Bruce worked as a real estate broker in High River, Alberta, for more than 40 years, which gave him ample opportunity to develop both properties and Very Strong Opinions about local land use, which he was happy to share with the Mayor. But while Bruce was a renowned grumbler, he was also quick to chuckle. He had a sense of mischief and would share stories of adventures and misadventures and laugh until he cried. He had a strong, if secret, sentimental side and would tell stories of growing up on the family farm, and of his parents, Joe (d. 1962) and Christie (d. 1989). The Dour Scot loved his family. He was close with all of his brothers and sisters, Bill (d. 1988), Beth Dillabaugh,Tom (d. 2017) and Peg Fyke (d. 2018) and their children throughout his life. He loved his wife Jocelyn, daughter Tanya Laing Gahr (Rusty) and son Scott deeply, even if he showed it by voicing disapproval for some of their choices. On the other hand, if he bestowed a rare “Good for you”, it was clear that he was terribly impressed and proud. He adored his grandchildren, Alexa Laing-Moore, Theo Moore and Ethan Moore beyond measure. The world stopped and started with them. He would have walked across fire for them (or sent the money equivalent of fire-walking because he also believed in paying experts for their skills). Bruce was a man of business, and insisted on getting things done. Friends and family would lean on him to handle matters in trying times because he could put aside emotions to deal with the business at hand—not because he prioritized business but because he prioritized family. Above all else, he wanted his family, and the families of the people he cared about, to be safe. True to type, Bruce didn’t want a service. He didn’t want the fuss and he definitely didn’t want the expense. His family have decided to listen to him JUST THIS ONCE and honour his wishes. A wake to celebrate this cranky, loveable Dour Scot will take place at the Highwood Golf & Country Club on Saturday, March 9th, 2019 from 4:00 p.m. to 7:00 p.m. To send condolences and view Bruce’s Tribute Page please visit www.lylereeves.com . Caring for the family is Lyle Reeves Funerals of High River (Craig Snodgrass) 403.652.4242.

Bruce Laing was sometimes referred to as "The Dour Scot" by his family because, despite being born on a small farm near Wapella, Saskatchewan, and having never actually visited Scotland, he had all of the celebrated and sometimes frustrating... View Obituary & Service Information

The family of Mr. R.R. Bruce Laing created this Life Tributes page to make it easy to share your memories.

Bruce Laing was sometimes referred to as &quot;The Dour Scot&quot; by his...