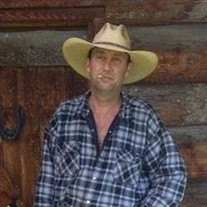 Mr. Raymond James (Ray) Lorenzen of Nanton, Alberta passed away on October 12, 2017 at the age of 56 years. Ray is survived by his wife Robin, who was the love of his life, and his daughter Shanna who hung the moon and the stars for him. He is also survived by his mother Gloria Lorenzen, younger brother Donnie (Tammy) Lorenzen and niece(s) Kayla, Samantha, and Bailey, and numerous cousins who reside in Alberta, B.C., and the North West Territories. His brother-in-Law Gerald Muri, and nephews J.R. and Cody. Ray was predeceased by his father Leonard, and his uncles Bill and Dave. Ray was born unexpectedly when his parents were in Edmonton, AB for a visit with his mother’s parents, and continued to do the unexpected for the rest of his life. Ray spent the majority of his youth exploring the many interesting towns and out-of-the-way nooks and crannies of Southern Alberta with his brother Donnie, his friends Guy Mason, Peter Roost, and so many others that it would be impossible to name them all. Ray became a Red-Seal certified welder shortly after completing high school, and worked on multiple projects across Canada as a rig-welder, foreman, general foreman, construction manager, and project manager for multiple contractor and owner organizations. His keen intelligence, coupled with his drive to succeed and a solid work ethic saw him move rapidly up through the ranks to managing more and more complex construction projects for both pipeline and facility installation. He was never as happy as when he had a complex problem to solve, and the tools to complete a project in a timely and efficient manner. When not away working on a project, Ray loved to spend as much of his time in the bush as possible. He was an avid hunter and outdoorsman, who was also keenly interested in conservation and responsible land-use. He loved riding his horses, and just watching the seasons change on his place. A Memorial Service will be held on Monday, October 23, 2017 at 2:00 p.m. at the Church of Jesus Christ of Latter Days Saints, 909 – 9th Street SW, High River, AB T1V 1K6 To send condolences and view Ray’s Tribute Page please visit www.lylereeves.com . Caring for the family is Lyle Reeves Funerals of High River (Craig Snodgrass) 403.652.4242.

Mr. Raymond James (Ray) Lorenzen of Nanton, Alberta passed away on October 12, 2017 at the age of 56 years. Ray is survived by his wife Robin, who was the love of his life, and his daughter Shanna who hung the moon and the stars for him. He... View Obituary & Service Information

The family of Mr. Raymond James Lorenzen created this Life Tributes page to make it easy to share your memories.