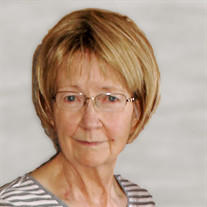 Rita Esther Storch, beloved wife of Terry Storch, passed away at home surrounded by her family, after a brief but courageous battle with cancer. She was 72. Rita is survived by her husband of 52 years, Terry, two daughters, Janice of High River, Monica of Edmonton, two Grandsons, Ryan and Evan of High River and numerous nieces and nephews. Rita was born June 3, 1947 in Provost, Alberta to Olav and Ellen Spilde, their only child. The small family lived on a farm in the Provost area where she attended a one-room school for several years with her Mother as teacher in some years. Even though she did not have any brothers or sisters, with many of Olson cousins close by, she never felt she was an only child. She frequently recalled the cousins coming over for Sunday evening meals. Her fondest farm memory was the bale slide made of wooden boards that her Dad would make for her every winter. She spent countless hours climbing the bale stack and sliding with great glee down the snowy and icy slide. The Spilde Family eventually moved into the Town of Provost where Rita attended public school. She took piano lessons for years and finally achieved her Toronto Conservatory Music degree. She continued taking music training and teaching music lessons, even after her marriage to Terry and having a family. Rita played basketball in high school but when asked if it was because she was taller, she said no. She had to play because if she didn’t there was not enough girls to make a team. After graduating with Honours from Grade12, she enrolled in university at Camrose Lutheran College, where she met a guy from Hanna, which was the start of the relationship. Rita and Terry were married in Provost on Aug 19, 1967, their personal Centennial project that lasted 52 years. They both completed their education degrees at the University of Calgary. Both Terry and Rita had teaching jobs in Calgary, together bought a house and lived in Calgary for three years. After tiring of the city they moved to Hanna, where Janice was born, and eventually to New Brigden in Eastern Alberta. They were both very involved with the community, especially the curling rink in winter and a local theatre group. Rita eventually became the Music Director of the New Brigden Players. Monica was born in Oyen during a very cold spell of prairie winter one January. The family next moved to Huxley (North of Three Hills) for Terry’s work and in the Fall of 1977 they moved to High River. High River has been their home since then. Once in High River, Rita became involved in teaching piano lessons, worked for an accounting firm, a gift store and a stationery store at various times. She also wrote and self-published a recipe book on Bread Baking called “Bread Baking for the Skeptical”, some of which are still in use in High River. She also taught bread baking classes in their home (no complaints from Terry). She did other writing and editing as well and at one point was the Editor of the National Lutheran Church magazine. Rita operated a Bed and Breakfast, named Rita’s Repose, in their home for a few years. She hosted a variety of people from many different places. She took pride in her daughter’s accomplishments and really enjoyed coming up with creative activities for Janice and Monica. Rita’s life-resume contains words such as daughter, wife, student, mother, writer, poet, editor, painter, curler (achieved an 8-ender),teacher, sewer, weaver, knitter, church pianist, volunteer, Library Board member, church supporter, National Park host to groups, tourist, traveller, quilter, book club member, handicraft guilder, friend and Grandma, to name but a few. Don’t forget to add tolerance and understanding of Terry and his many related activities. Rita and Terry always had a desire for travel and after Terry’s retirement in 2002, their travel was no longer confined to summers and Christmas holidays and so traveled any time of the year. At last count having travelled to over 25 countries such as Australia, New Zealand, Fiji, Cuba, Costa Rica, Norway and many other European countries as well. A recent new activity was Geocaching in which Rita was the designated navigator, with GPS and maps in hand, for the Senior Seeker geo team. A year ago this past August they celebrated their 1000th find with Geo-Grandson, Evan assisting. February, this year, Rita developed distressing symptoms which lead to a cancer diagnosis and chemotherapy, which proved to be unsuccessful. She passed away 8 months after her cancer diagnosis. Rita and Terry are both very grateful for the well wishes, thoughts and prayers from church and community friends. In lieu of flowers and If desired; donations in Rita’s memory can be made to: High River Hospital Foundation- www.highriverhealthfoundation.ca or to Canadian Lutheran World Relief - www.clwr.org A private, family funeral was held. A Community Celebration of Rita’s Life was held Sunday, Sept 15, 2 – 4 PM at Sheppard Family Park Munroe Barn in High River. The Red Barn is located at 12 Ave and 5 St. SE in High River. All friends and community are invited to attend to celebrate Rita’s life. Caring for the family is Lyle Reeves Funerals of High River (Craig Snodgrass) 403.652.4242.

Rita Esther Storch, beloved wife of Terry Storch, passed away at home surrounded by her family, after a brief but courageous battle with cancer. She was 72. Rita is survived by her husband of 52 years, Terry, two daughters, Janice of High River,... View Obituary & Service Information

The family of Mrs. Rita Esther Storch created this Life Tributes page to make it easy to share your memories.