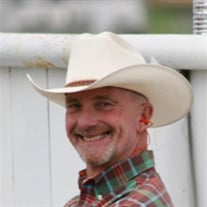 On October 11, 2017, after courageously battling for4 ½ years, Bob lost his struggle to cancer and passed peacefully away with Kendra and family at his side. He was predeceased by his parents, Robert & Lois Sinclair, and his sister, Kim Kulchycki. Bob is survived by his wife Kendra Karch-Sinclair, his son Logan Sinclair, and many nieces, nephews & close cousins. Those who knew Bob from his various sporting passions, including, scuba diving, penning, mounted shooting, and the Calgary Stampede WPH committee, will miss his friendly, hardworking and thoughtful demeanor. Fellow employees from both Telus and The Home Depot, will also remember Bob’s meticulous attention to detail and his quirky sense of humor. Bob moved west from Windsor, Ontario in his early twenties where he began his career with the then AGT (now Telus). More than thirty years with Telus allowed him to transition to become a valued employee of the electrical department of The Home Depot after retirement from Telus. From a young age Bob pursued many athletic activities including distance running, bowling (provincial champion), swimming, and what some may not know, disco dancing in the Detroit discoes of the 70’s. Can’t you just picture him in a one-piece 70’s disco jumpsuit with platform shoes? Bob spent more than 25 years as a scuba diving instructor within the Calgary area. Many locals have Bob to thank for their various scuba course certifications. His wife never did find out about all the crazy adventures on those instructor dive trips. He was an avid golfer, until horses came along and completely consumed his life. With the guidance of special friends, the Mathiesen’s, Bob took up cattle penning/sorting. Of the many cherished memories, his family will remember him winning a saddle at the Penning Nationals in Calgary. Then Bob was introduced to the discipline of Cowboy Mounted Shooting where he really developed a love for riding hard and shooting clean. Thanks to the incredible support of the CMSA family, Bob never quit competing & staying involved while his health was impacted. With guns blazing, Bob continued to ride and shoot, even while undergoing chemotherapy over the past years. Bob proudly wore his championship belt buckles. My friend, my love, my soul mate, you will always be remembered fondly, and you will forever be missed. It is now your time to enjoy riding Cody and giving hugs to our many pets who you are now with. A gathering to celebrate Bob’s life will occur in the spring, 2018. If friends so desire, memorial tributes may be made directly to the High River Healthcare Foundation (Cancer Centre) in memory of Bob (560 9th Ave SW High River, Alberta T1V1B3, www.highriverhealthfoundation.ca/) To send condolences and view Bob’s Tribute Page please visit www.lylereeves.com . Caring for the family is Lyle Reeves Funerals of High River (Craig Snodgrass) 403.652.4242.

On October 11, 2017, after courageously battling for4 ½ years, Bob lost his struggle to cancer and passed peacefully away with Kendra and family at his side. He was predeceased by his parents, Robert & Lois Sinclair, and his sister, Kim Kulchycki.... View Obituary & Service Information

The family of Mr. Robert "Bob" Sinclair created this Life Tributes page to make it easy to share your memories.