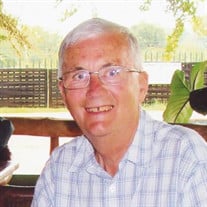 Bob Irvine, beloved husband and best friend of Glenna Irvine, and Michelle and Natasha’s amazing Dad, passed away on Tuesday March 16, 2021 at the age of 81 years. Bob was born in a small-town hospital in Mt. Isa, Queensland near a cattle station in Australia. Shortly after, the family moved to the coal mining town of Scottville where he started grade 1 at Queens Beach State School. In grade 8, Bob had the good fortune to receive a scholarship to a boarding school in Charters Towers, Queensland. After taking only 4 years to graduate Grade 12 (Senior Matriculation), Bob studied for one year at Teachers’ Training College in Brisbane. He began his teaching career in Bowen before moving on to Mary Kathleen, a new mining town in Australia. In 1962 Bob hopped on a Greek ship, the Patris, from Sydney to Athens and went by train from there to London, England. He toured Britain and Europe, with a ski trip to Austria to experience snow for the first time! In 1963 he sailed for Canada, spending the summer in Toronto living at a frat house and working for Coca Cola. After what we can only imagine was a very enjoyable summer (no stories were shared with his kids!), he took a teaching job in the northern forests of Ontario at Deer Lake. The following summer Bob visited friends in Novia Scotia, Toronto, then jumped on the train to Lloydminster where he began his tour of Alberta… “what did I know about ending up there!!” Upon his return to Australia Bob taught for a few months in Queensland schools, but his heart told him to travel! He sailed again for Canada, ending up in Lacombe where, in 1965, Bettie and Ken Ditzler introduced Bob to Glenna Robins on a blind date. They were married on November 11, 1967. In 1968 they flew to Australia to visit Bob’s mother and grandmother, touring Queensland before returning to Victoria, B.C. where Bob attended the University of Victoria. They returned to Edmonton where Bob continued his education degree at the University of Alberta. In May 1970, after a move to High River, Bob spent one year teaching in Blackie, then started teaching in High River. In 1971 Bob became a proud Canadian but retained his abiding love of all things Aussie. Bob had many interests over the years including reading & learning, chocolate, travel, chocolate, gardening, and teaching his kids & grandkids unusual expressions (more about that later). Bob was the first chair of the Marigold Library System, headquartered in Strathmore, and was chair of the High River Library Board when the new Centennial Library was built (which meant that his family was voluntold to help move all the books to their new home). In 1994, Bob retired from Spitzee School as Vice-Principal to pursue his love of travelling with Glenna. They toured Australia extensively during their many visits “down under” and intrepidly ventured off to explore many countries including Mexico, Cuba, Bali, Costa Rica, New Zealand, Fiji, Samoa, and Singapore. They did pause their independent adventures to join a guided tour group to South Africa and later found that cruises were another passion -- Alaska, Panama Canal, the Rhine and Mosel Rivers in Germany, and a Holland America Grand Asia and Australia Voyage. We loved our Dad enormously, especially when travel was involved! We have so many memories that involve adventures with Dad - playing in the waves on a sandy hot beach, camping in the mountains, always sending Dad out first to check for mosquitoes, and exploring the Big Rock where we unexpectedly learned that his new bifocals were not designed for climbing! Dad remembered and recounted every one of his holidays by whatever gastronomical delight came his way, “that’s where your Mom and I had the best key lime pie!“ or “remember that dessert...”. Unusual expressions were also part of Dad‘s charm. We often heard him exclaim in delight “too right”, use the slightly less enthusiastic comment “blow it out your ear”, inform us that something was “chockablock” rather than just full, and many times, out of seemingly nowhere, Dad would pick up a piece of wood, wave it in the air and exclaim “look out she cried as she waved her wooden leg!” We’re still not sure what that last one means, but it’s become a family expression… Dad was never flashy and never sought the limelight. He chose to do what was right and what was fun because that’s the kind of man he was. When he needed to get “gussied up”, his final touch was to dash on some cologne that he called “wow the women”. It took Natasha many years to realize that this was wasn’t the actual name of that cologne! Dad savored every moment of his life. He found humor, beauty, and magic in everyday moments. He will be remembered for his sense of humour, his enthusiasm as a teacher and his passion for books and art. Besides his loving wife Glenna, Bob will be dearly missed by his daughters; Michelle (James) McAra of Calgary and Natash Irvine (David Nix) of Edmonton. He loved to spend time with his grandchildren Kaitlyn and Brendan McAra (the encyclopedia and atlas were constant sources for answers during discussions with them!). He was kind, fair, and he taught us all how to be better people. That’s quite a legacy for a small-town boy from Australia. Love you Dad… see you Thursday. A private family service will be held at a later date. If friends so desire, memorial tributes, in lieu of flowers may be made to: the High River Centennial Library (909 – 1 Street SW, High River AB, T1V 1A5), or the Alzheimer Society of Calgary (800 – 7015 Macleod Trail SW, Calgary AB, T2H 2K6), or to the charity of your choice. Caring for the family is Lyle Reeves Funerals of High River (Craig Snodgrass) 403.652.4242.

Bob Irvine, beloved husband and best friend of Glenna Irvine, and Michelle and Natasha&#8217;s amazing Dad, passed away on Tuesday March 16, 2021 at the age of 81 years. Bob was born in a small-town hospital in Mt. Isa, Queensland near a cattle... View Obituary & Service Information

The family of Mr. Robert Irvine created this Life Tributes page to make it easy to share your memories.