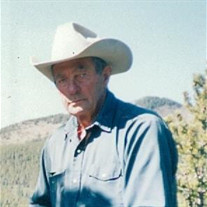 Jim Lowe of Nanton, Alberta passed away on May 23, 2015 at the Willow Creek Continuing Care Centre in Claresholm at the age of 88 years. Jim is survived by his wife of 58 years, Betty Lowe; sons, Bob of Nanton, Donald (Kathrin) of Nanton, David (Trina) of Cochrane and daughter Monica (Kerry) Paslawski of Grande Prairie, AB; grandchildren; Virgil Lowe, Veronica (Cory) Walker, Tyson Lowe, Matthew Lowe, Leah Paslawski, Lori Paslawski, Julia Paslawski, Laina Lowe, Angela Lowe, Kelly Lowe, Great-Grand-daughter Avery Noelle Walker, Sister Pat Massie of Black Diamond, Brother Jack (Ida) Lowe of Cardston and was predeceased by sister Clea Felesky. Jim was born in Cardston, Alberta where he spent the first 40 years of his life farming and ranching near the St Mary's River. Jim and Betty moved to Nanton in 1966, where they raised their family on the ranch west of town. Jim was always thinking of new ways to do things and was usually one of the first to implement new ideas and technology on the farm, along with many of his own inventions. He had the first big round baler in the community and also had two of the first Simmental cows imported to Canada. Jim loved to build. He built a thriving farming/ranching business, feedlot, a log house which he loved, and many pieces of farm equipment along with various contraptions and inventions. He was always learning and was not afraid to try new ventures – in fact he revelled in them. His traits of honesty, intelligence, humility, kindness, and good humour were much appreciated by many people. In later years he enjoyed helping and watching as his sons continued to build on what he had begun. Jim was a reader, and an idea man. He was always interesting and interested in many things. He loved to tease and his laugh was unique and contagious. A solid community member, Jim enjoyed simple gatherings with a good joke or two and excellent conversation. Jim imparted to all four of his children a love of the land, agriculture, the mountains and the prairies. He was very proud of the fact his kids continue to work in agriculture to this day and that none of them ended up in jail. A Celebration of Life was held on Monday, June 1, 2015 @ 1:00 p.m. at the Christ Church, 2302 – 20th Street, Nanton, AB. Memorial Donations can be made to the Willow Creek Continuing Care Centre, 4221 – 8th Street W, Claresholm, AB T0L 0T0. To send condolences and view Jim’s Tribute Page please visit www.lylereeves.com . Caring for the family is Lyle Reeves Funerals of High River 403.652.4242.

Jim Lowe of Nanton, Alberta passed away on May 23, 2015 at the Willow Creek Continuing Care Centre in Claresholm at the age of 88 years. Jim is survived by his wife of 58 years, Betty Lowe; sons, Bob of Nanton, Donald (Kathrin) of Nanton,... View Obituary & Service Information

The family of Mr. Robert "Jim" Lowe created this Life Tributes page to make it easy to share your memories.