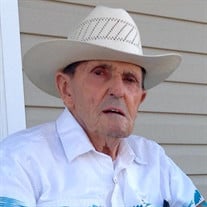 June 10, 1928 - January 27, 2016 Bob lived 39 years in the MD of Foothills having moved from Calgary in 1977 bringing his plumbing and heating business with him. He worked for his father who had started J. B. Rogers Ltd. in 1905. In 1959 he purchased the business and with a sterling reputation for hard work and job well done he continued to serve many notables in the MD of Foothills even to third generation. While work was rated high in Bob's priorities he was never happier than when he could work with,or for, one of his children. Son Lee, hiring him and his cousin Wayne, to back fill plumbing ditches. They say to this day it was the best job they ever had. When Lee was very young his father found him invaluable to access difficult crawl spaces. He paid him back by helping him and his good wife, Sandy to live on sight while they built their home north of Cochrane, mostly sweat equity. Daughter Lori shared his love of horses, he trailed horses often and they enjoyed the horse camps, near to hand, and spent long days in the saddle. Both very proficient. Rough carpentry was another of Bob's pleasures (work of course). Plenty of that on the 40 acres we called home until old father time and poor health dictated a change. We moved to Okotoks in 2000 and enjoyed our stay there . Dumpster diving enthralled his nibs and the garage soon filled with wooden treasures. Lori had plenty to keep his job jar filled. Multi dog houses replete with shingles and a floor were well received at First Nations. Lost track of the number of bird houses. Lori bought an older home and he helped immeasurably enjoying every minute. Slowly Parkinson's, diagnosed in 1998, limited his efforts and in 2012 he started his journey to long term care. He was placed in The Rising Sun LTC in Black Diamond, AB. Our #1 choice. It was very difficult for such a work-a-hol-ic to adapt to such a major change. He did his very best to adjust and with his attitude and the kind, compassionate care at this Black Diamond jewel his stay of three years was above average. Muriel, Bob's wife of 65 years + was at his bedside when he quietly passed. He is survived by his wife, Muriel, Son Lee (Sandy) Cochrane, Daughter Lori (Calgary) Granddaughter Chelsey (Skylar) Millarville, Grandson Cody (Anna) Calgary, Sisters Mim, Alberta, Lenora (Abbotsford) Patricia (Rance), Brother George (Cochrane). Bob was predeceased by his mother Lenora & his father J. B. Rogers and 6 siblings. To respect Bob's wishes no services will be held. If you wish donations may be made to Parkinson Alberta, 102-5636 Burbank Crescent SE, Calgary, AB T2H 1Z6 or online www.parkinsonalberta.ca To send condolences and view Bob’s Tribute Page, please visit www.lylereeves.com . Caring for the family is Lyle Reeves Funerals of High River (403.652.4242).

The family of Mr. Robert "Bob" Bishop Rogers created this Life Tributes page to make it easy to share your memories.