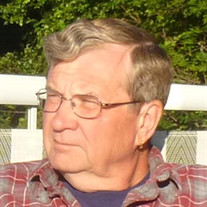 Robert Armin Steinhauser passed away unexpectedly of heart failure on January 12, 2016, in Calgary, Canada, at the age of 70. He was born in St. Paul, Minnesota on November 2nd, 1945 to Armin and Grace (Anderson) Steinhauser. He was raised in St. Paul and graduated from Murray High School. He had a strong interest in nature, was an avid camper in the Boy Scouts and enjoyed staying at a rustic log cabin in the St. Croix River Valley. Bob attended the University of Minnesota, the University of Washington in Pullman, Washington and the University of Calgary. He lived most of his life in Alberta, Canada, where he worked for many years as a valued member of teams of archeologists excavating significant sites in northwestern Canada. Bob has very deep roots in Alberta's Archaeological Consulting world where he established many, many lifelong friendships. He was a lifelong lover of books and knowledge, an amazing cook, and listened to the CBC daily. He was preceded in death by his parents, Armin and Grace Steinhauser. He is survived by his sister Jean (Ault) Nathanielsz of Chapel Hill, North Carolina and brother David (Beverly) Steinhauser of Ramsey, Minnesota. Bob's adoptive family, Jane and David Kelley and their children Becky, Dennis and Megan, of Calgary, were central in Bob's life and remained so to the end. They gave him a great sense of belonging and loving support. Bob will be missed by his family and all those who knew and loved him. A Celebration of Bob’s Life was held on Saturday, January 23rd at the Heritage Funeral Home (1708 – 16th Ave. NE, Calgary). To send condolences and view Bob’s Tribute Page please visit www.lylereeves.com . Caring for the family is Lyle Reeves Funerals of High River, Alberta (403.652.4242).

Robert Armin Steinhauser passed away unexpectedly of heart failure on January 12, 2016, in Calgary, Canada, at the age of 70. He was born in St. Paul, Minnesota on November 2nd, 1945 to Armin and Grace (Anderson) Steinhauser. He was raised... View Obituary & Service Information

The family of Mr. Robert Armin Steinhauser created this Life Tributes page to make it easy to share your memories.