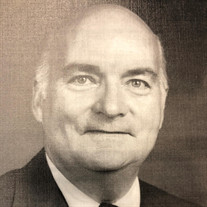 It is with great sadness that we announce Ron’s passing after a lengthy illness. Ron is survived by his wife, Anne; his children, Daryl (Mary) Smyth, Wendy (Mike) Hanrahan, Rhonda Allen, Glenn (Barb) Smyth; and Anne’s children, Roxanne (Mark) Johnson, Rita (Eugene) Elke, and Scott (Rhonda) Caron; as well as numerous grandchildren and great-grandchildren. He was predeceased by his mother Gladys and his father Gordon. Ron was born in Souris, Manitoba during the Great Depression. Despite the hardships that he and his parents endured during that difficult time, he had many warm memories of growing up in that small town with his extended family and friends. His father Gordon was his hero and taught him the value of hard work and responsibility. The family later moved to Medicine Hat where Ron completed high school and pursued his love of playing hockey and golf. He moved on to Calgary and became a Chartered Accountant, articling with Morton & Hills and then spending twenty-two years with Western Securities Limited and the O’Connor family. He married Sylvia (Colpoys) in 1955 and together they raised four children first in Calgary and then moving to the Red Deer Lake area in 1968. During these years Ron was active in the community and was named an Honorary Life Director for the Booster Club of Calgary. He also volunteered with and chaired several committees for the Calgary Stampede. This allowed him to ride his horse in the Stampede parade, which thrilled his young children! As a young man Ron took up hunting with his father, and that led to a passion for bird dogs & field trials, horses and fishing. His first horses, Wimpy Wasp and Peanuts, and his first dogs, Bess and Penny soon became part the family, and there were many more to follow over the years. Some of his fondest memories are of time spent with his father, friends and family at the field trials, in the bluffs, or on a boat in a remote lake. His love of all things outdoors eventually led to a partnership in Russell Sporting Goods. His field trialing eventually took him to the southern U.S., an area that he fell in love with. He loved the history, the piney woods, the year-round golf, the azaleas and the people. Ron and Anne were married in 1988 and together they spent several wonderful years living, working and golfing in South Carolina. They returned to Canada (most recently residing in High River) and were lovingly surrounded by family, friends and several beloved dogs, horses and other animals over the years. Ron’s family wishes to thank all of those who cared for him during his illness and, in particular, Dr. Ben Andruski and all of the staff from the 3rd floor of the High River Hospital who supported us all during his final days. It was Ron’s wish to not have a formal service, so the family will hold a private celebration of his life. In lieu of flowers memorial tributes to Ron may be made to: The Heart and Stroke Foundation of Canada (https://www.heartandstroke.ca) Caring for the family is Lyle Reeves Funerals of High River (Craig Snodgrass) 403.652.4242.

The family of Mr. Ronald Gordon Smyth created this Life Tributes page to make it easy to share your memories.

It is with great sadness that we announce Ron’s passing after...