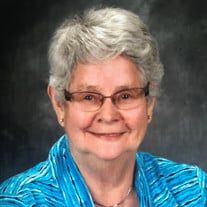 Rosaleen (Rose) Teresa Hrycyk passed away peacefully, surrounded by family, at the High River Hospital on July 11, 2021. She was born on February 23, 1932 in Eston, SK to Teresa and Patrick Nally. Rose helped at the family cartage business that supplied Quaker Oats and coal to the community. She enjoyed life to the fullest. Rose married Dean Pederson and adopted her daughter, Rebecca. Dean passed away at a young age and shortly after Rose and Rebecca moved to Calgary to be near family. During this period, she completed her Nursing Assistance education. She worked for several years at the old General Hospital. Soon she met the love of her life and soul mate, Victor Hrycyk. They were married on May 16, 1964 and had two more children; Layne (Julie) and Paula. Many years were spent in the family home in Willow Park and summers were spent travelling back to Eston where more memories were made. Rose spent many years caregiving for children in her home. She was always taking on new children and happily cared for them as her own. In the early 2000s Rose and Vic moved to High River to be near children and grandchildren and they spent their last years there. Rose spent these years focusing on being a grandma, golfing when she could, volunteering for 19 years at the High River Hospital Auxiliary and accompanying Vic on his many craft sales to sell his woodwork. Vic pre-deceased her in 2013 and left a large void in her life. They had nine grandchildren; Jason Moroney, James Moroney, Pamela Moroney (Mike Pfeiffer), Kieran Hrycyk, Ethan Hrycyk, Brennan Hrycyk, Jaylin Hrycyk, Adian Cox (Madi Stoltzfus) and Keaten Cox and one great grandson, Mark Moroney. She leaves to mourn her sister Elizabeth, sister-in-law Nadia, brother-in-law, Bob, as well as numerous nieces and nephews, whom she loved as her own. She is predeceased by her husband, Victor Hrycyk, her mother Teresa, father Patrick, and brother Connellous, grandson Jason Moroney, brothers-in-law, Norm, Orest, Chan, Ernie, sisters-in-law, Gloria, Patricia, Judy and Sonja. The family would like to thank Dr. Powell and the staff of Unit 300 at the High River Hospital, as well as the staff of Unit 29 of the Peter Lougheed Centre. In lieu of flowers, memorial donations may be made to the Hospital Auxiliary through the High River District Health Care Foundation, 560 - 9th Avenue, High River, AB T1V 1B3, www.highriverhealthfoundation.ca A Funeral Mass was held on Tuesday, July 20 at 11:00 a.m. at St. Francis de Sales Catholic Church in High River, Alberta. Caring for the family is Lyle Reeves Funerals of High River (Craig Snodgrass) 403.652.4242

Rosaleen (Rose) Teresa Hrycyk passed away peacefully, surrounded by family, at the High River Hospital on July 11, 2021. She was born on February 23, 1932 in Eston, SK to Teresa and Patrick Nally. Rose helped at the family cartage business... View Obituary & Service Information

The family of Mrs. Rosaleen Theresa Hrycyk created this Life Tributes page to make it easy to share your memories.