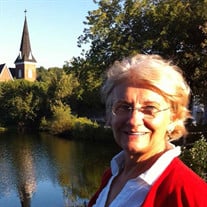 Rosemarie Murray (née Sicard) - Maizie - passed away peacefully on January 7, 2020, days shy of her 73rd birthday. She was a mother, grandmother, an entrepreneur, an artisan, a dear friend to many - a person who gave, unselfishly, more than she received. We celebrate her time on our planet and how she touched our lives and hearts. Son Scott and daughter-in-law Glenda Murray, of Calgary; former husband and life-long friend David Murray of De Winton; daughter Jennifer, son-in-law Michael and grand daughter Sabine of Toowoomba, Australia; son Hugh John, daughter-in-law Amélie, grand daughters Élodie and Maizie Delphine of Montréal, Quebec; and her most trusted friend, companion and confident, Molly, her beloved Westie who was always at her side. Maizie shared her body with cancer for almost 20 years - but she did not let the disease define her. And although she endured hardships and setbacks in the past few years, she managed to detach from the negativity and find peace. Her heart, she reflected, was her children and grandchildren - and one of her most cherished memories - the week she spent in the summer of 2013 in Magog, Quebec, with her family, celebrating the wedding of her son Hugh John. And of the most precious time she spent with her young grand daughters, calming them as infants, reading stories to them as toddlers, holding their hands as they walked Molly - her heart had never been so full. As a store owner and tireless booster of Nanton, Alberta, Maizie was involved in supporting and organizing events for the town, such as the Nanton Antique Walk, the Chilli Cook off, and the mission to save Nanton’s grain elevators from the wrecking ball, as many other small rural towns had seen theirs disappear. She had an amazing flare for merchandising in her stores, creating beautiful, imaginative displays, and was most at ease in having meaningful conversations with people from around the world that happened upon her store - sometimes lasting for hours. She loved current events, debating the merits of the latest acclaimed movies, opining about cultural gossip, arts, nature, religion, science - she was forever fascinated with the changing world around her. Maizie, despite her warm, gregarious nature, was also modest and private. She would want you to remember her by simply being mindful and engaged with those around you; by performing small acts of kindness - smiling at those close to you, or at those you have yet to meet; or by sitting next to water - a river, a lake, the ocean - which she loved so much, and reflecting on the wonder and beauty of life, and of those we love and hold in our hearts. Maizie loved this quote from Bruce Springsteen: “So you walk on through the dark because that’s where the next morning is.” And so we will walk with you, Maizie, and greet the light of a new day. No service will be held. Caring for the family is Lyle Reeves Funerals of High River (Craig Snodgrass) 403.652.4242.

Rosemarie Murray (née Sicard) - Maizie - passed away peacefully on January 7, 2020, days shy of her 73rd birthday. She was a mother, grandmother, an entrepreneur, an artisan, a dear friend to many - a person who gave, unselfishly, more than... View Obituary & Service Information

The family of Mrs. Rosemarie Elizabeth Murray created this Life Tributes page to make it easy to share your memories.