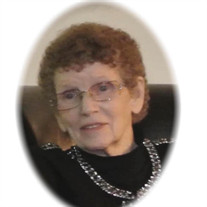 Sheila, the youngest of Luther and Sylvia Wallis' five children, was born in the Rural Municipality of South Cypress, Manitoba on June 12, 1936, and died peacefully in High River, Alberta on July 23, 2021. Sheila is survived by her children, Debra (Jim) Paton (Okotoks, Alberta) and their daughters Sheila Paton and Amanda (Jeremy Holland), and their daughter Kaylee (Calgary, Alberta); Elaine (Larry Henderson) and their children Tom and Ayleigh (Calgary, Alberta); Heather (Grant) Barkman and their children Eric and Sarah (Winnipeg, Manitoba); and Grant Sorensen (Calgary, Alberta) She is also survived by her sister Eleanor Hamilton and sisters-in-law Alma Wallis and Noreen Hicks and many nieces and nephews. Sheila was predeceased by her husband Gordon, brothers Tim (Joyce), George and Roy (Lorna) Wallis and brother-in-law Jack Hamilton. In 1945 the Wallis family moved from the farm to Glenboro, Manitoba. Sheila attended school in Glenboro and then moved to Wawanesa, Manitoba to work for the Wawanesa Mutual Insurance Company. There she met Gordon Sorensen and they were married in 1955. They had four children and remained in Wawanesa until the family moved to Regina, Saskatchewan in 1972. Gordon and Sheila made a final move west and retired to High River, Alberta in 1994. Sheila’s favourite times were the summers spent with the family at the cottage at Killarney Lake, Manitoba and every Christmas. She loved indulging her children, grandchildren and great-grandchild and gathering the family for games, cards and endless food. Sheila and Gordon also enjoyed the many winters spent in Arizona. Sheila’s family wishes to thank the staff and volunteers at the High River Hospital Long Term Care facility for the excellent and compassionate care that she received. A private family Remembrance will be held. Memorial donations may be made in Sheila’s memory to the High River District Health Care Foundation, 560 – 9th Avenue SW, High River, AB T1V 1B3, www.highriverhealthfoundation.ca. Caring for the family is Lyle Reeves Funerals of High River (Craig Snodgrass) 403.652.4242.

Sheila, the youngest of Luther and Sylvia Wallis' five children, was born in the Rural Municipality of South Cypress, Manitoba on June 12, 1936, and died peacefully in High River, Alberta on July 23, 2021. Sheila is survived by her children,... View Obituary & Service Information

The family of Mrs. Sheila Dorothy Sorensen created this Life Tributes page to make it easy to share your memories.

Sheila, the youngest of Luther and Sylvia Wallis&#39; five children,...