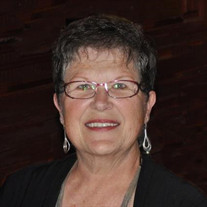 Mrs. Shirley Cooper (nee Shyiak) of Okotoks, Alberta passed away on November 8, 2017 at the age of 76 at the Foothills, Country Hospice. Shirley is survived by her husband Cleve, daughter Shireen Boutilier and husband Gary of Guelph, Ontario, grandchildren Jade, of Montreal, P.Q. and Danika of St. Catharines, Ontario ; son Greg and his wife, Barbara and children Rachel and Paige and step children, Luke, Dawson and Kolbi-Lyn of Okotoks, Alberta; son David and his wife Karen and children Riley and Graden of Edmonton, Alberta. Shirley is also survived by her sister, Eileen Miller of Ottawa, Ontario and brother Jerry Shyiak of Thunder Bay, Ontario. She also leaves behind several close relatives, cousins and a host of many friends. She was predeceased by her father and mother, Walter and Elsie Shyiak of Thunder Bay, Ontario. Shirley was born on the family farm at Alonsa, Manitoba and grew up in Amaranth, Manitoba where she and her husband Cleve met in school together. After completing high school, Shirley attended Manitoba Teacher’s College in Winnipeg and taught school for two years in a one room school house near Portage La Prairie. After marrying in 1963, Shirley followed her husband around to RCMP postings in the N.W.T, Yukon, Ontario, Manitoba and Alberta, raising a family of three children and leaving them behind at various places in Canada in a final posting to Ottawa. Shirley was a wonderful, wife and mother who loved being a homemaker, hosting many family dinners on special occasions throughout the years. She enjoyed travelling to various countries of the world with Cleve and spent eight wonderful years wintering in Gold Canyon, Arizona. After retirement, Shirley and Cleve moved to the MD of Foothills and enjoyed seventeen years of acreage living in the area. Cremation has taken place. At Shirley’s request there will be no funeral service, however, a memorial service will take place in 2018 at the RCMP Training Centre Chapel in Regina, Saskatchewan after which her ashes will be placed in a Columbarium at the RCMP Cemetery on the grounds. Memorial donations can be made to the Foothills Country Hospice Society, P.O. Box 274, Okotoks, Alberta T1S 1A5 or a charity of your choice. To send condolences and view Shirley’s Tribute Page please visit www.lylereeves.com . Caring for the family is Lyle Reeves Funerals of High River (Craig Snodgrass) 403.652.4242.

Mrs. Shirley Cooper (nee Shyiak) of Okotoks, Alberta passed away on November 8, 2017 at the age of 76 at the Foothills, Country Hospice. Shirley is survived by her husband Cleve, daughter Shireen Boutilier and husband Gary of Guelph, Ontario,... View Obituary & Service Information

The family of Mrs. Shirley Kathleen Cooper created this Life Tributes page to make it easy to share your memories.