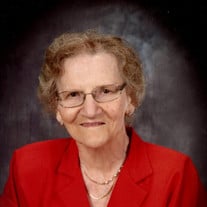 It is with sadness that we announce the passing of our mother, Teresa Gaja (Mastel) in High River at the age of 95. She is survived by her sons George (Sandy) Parkson and Alan (Nicole) Gaja; her daughter Anita (Mike) Nenadovich; grandchildren Dana, Riley (Cheree), Tara, Jared, Connor and Sherrie; great-grandchildren Brett, Ashley, Jesse, Domynic; her sister Rose (Mike) Thome, brother Joe (Geri) Mastel and sister-in-law Florence Mastel. She is predeceased by her husband John in 1998 and her son Walter in 2015, her brother George Mastel and sister-in-law Julia, brother Walter Mastel, and sister Molly Mastel. The second of six children, Teresa was born in Mendham, Saskatchewan (parents John and Mary Mastel) at a time when money and food was scarce and the winters were long and harsh. With an ill mother, along with the hardships of the “dirty thirties”, it meant Teresa had to quit middle school to help care for the family of eight. At the age of 20 she ventured out on her own to Medicine Hat where she met John Gaja. They married on November 21, 1944 and their life together began on a small farm with a two-room shack near Tilley, Alberta. Again, rough conditions while starting a family was a challenge however the strong will and persistence of both Teresa and John allowed them to purchase their new farm at the famous Gladys Ridge near High River in 1955 where they continued to work hard, live life and raise their four children. They retired to the town of High River in 1993. Those who were close to Teresa will remember her reminiscences of not only the struggles but also the many joys that comprised her long life. She will be dearly missed. Our family wishes to thank the compassionate and caring staff at the Seasons Retirement Community in High River, as well as the many years of care by Dr. Brian Jensen. A Funeral Mass was held on Wednesday, March 14th at 11:00 a.m. at St. Francis de Sales Catholic Church in High River (206 – 9 Avenue SW, High River, AB T1V 1A4). To send condolences and view Teresa’s Tribute Page please visit www.lylereeves.com . Caring for the family is Lyle Reeves Funerals of High River (Craig Snodgrass) 403.652.4242.

It is with sadness that we announce the passing of our mother, Teresa Gaja (Mastel) in High River at the age of 95. She is survived by her sons George (Sandy) Parkson and Alan (Nicole) Gaja; her daughter Anita (Mike) Nenadovich; grandchildren... View Obituary & Service Information

The family of Mrs. Teresa Gaja created this Life Tributes page to make it easy to share your memories.

It is with sadness that we announce the passing of our mother,...