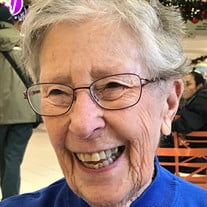 Mrs. Vida McIntyre of Calgary, Alberta passed away at the Bethany Care Centre on October 15, 2019 at the age of 92 years. Vida is survived by her four children, John (Patty) of Calgary, Karen (Bill) Fowler of High River, Tim (Kim) of Santa Clarita, California, Ross (Robin) of Calgary; seven grandchildren, Shannon (Blair), Lauren (Joe), Connor, Morgan (Dan), William (Cara), Taylor, Logan; eight great grandchildren, Mycah, Bennett, Nattali, Jonathan, Samuel, Jacob, Chaya, Talia, Whitfield; as well as numerous nieces, nephews, cousins and many friends. She was predeceased by her husband Charles, father Rupert Atkinson, mother and stepfather Ola and Mel Fillmore and siblings Dorothy, Nyoda, Ted and Colby. Vida was born in Sackville, New Brunswick and was the youngest of five children. In 1952 Vida and Charlie were married and then left the east coast in 1958 with John and Karen. They travelled across the country and came to Bowness, Calgary, settled and raised their family. Tim and Ross were born in Calgary. The family were long time members of Foothills United Church which Vida continued to work and serve in for many years. Vida had an extreme love of music and celebrated this gift by sharing with the church choir and singing for weddings and funerals. This gift of music Vida passed onto her family. In addition, community service was also a priority with Vida partaking in Meals on Wheels and Early Childhood Reading programs. Outdoor activities provided and immense source of pleasure for Vida. She loved to garden and her garden was often the envy of the neighborhood. Many happy summers were spent camping as a family at Wasa Lake in BC. Later, Vida and Charlie loved to take their trailer to Bow Valley, Kananaskis often taking grandchildren. Well into her eighties Vida continued to hike and cross-country ski with her Second Sixties Seniors group. However, Vida’s greatest love and achievement was raising and watching her children grow into the people they have become and she was enormously proud. A Celebration of Vida’s Life was held on Friday, October 25th at 1:00 p.m. at the Foothills United Church (3803 – 69th Street NW Calgary, AB T3B 2J9). Memorial donations may be made to the Foothills United Church or to the Alzheimer’s Association. To send condolences and view Vida’s Tribute Page please visit www.lylereeves.com . Caring for the family is Lyle Reeves Funerals of High River (403.652.4242).

Mrs. Vida McIntyre of Calgary, Alberta passed away at the Bethany Care Centre on October 15, 2019 at the age of 92 years. Vida is survived by her four children, John (Patty) of Calgary, Karen (Bill) Fowler of High River, Tim (Kim) of Santa... View Obituary & Service Information

The family of Mrs. Vida Mae McIntyre created this Life Tributes page to make it easy to share your memories.

Mrs. Vida McIntyre of Calgary, Alberta passed away at the Bethany...