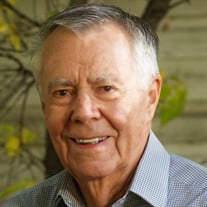 Mr. Wally Kemp of High River, AB, passed away on August 15, 2018 at the Rockyview General Hospital in Calgary at the age of 85 years. Born in Olds, AB in 1933, Wally was the youngest of three brothers. He moved to Lethbridge in his late teens and then to Calgary in his 20s. Wally and Adele moved their family to High River in 1976 and it has been their home ever since. As a young man, Wally attended school in Olds while doing odd jobs. Through his brother Gavin, he found employment at the Lethbridge Research Centre. While in Lethbridge, Wally became involved in a youth group where he met a leader who motivated him to begin his insurance career. That connection opened the door to a position at Guardian Insurance in Calgary, where he met Adele, as well as his future business partner, Ray Johnston. The Kemp family relocated to High River when Wally joined the team at Hi-Alta Insurance Agencies. He later became a partner with Dick Liddell, Ray Johnston, and Hazel Dale. Wally remained involved with Hi-Alta until the late 1990s when it became the cornerstone of Western Financial Group. He was later named a Founding Director of the Western Financial Communities Foundation. Wally dedicated his life to the community of High River and the groups he belonged to. For him, community was not just something to seek, but something to create. He was a long-standing member of the High River Rotary Club and High River United Church. He applied his handyman expertise for hours on end within the community, including both old and new United Church facilities. His community service and passion for helping didn’t end there. Anywhere that extra hands were needed, Wally could be found. Providing service as a sound person at the church, driving for Canadian Cancer Society and the High River Hospital were a few more on the long list of ways he showed his devotion to the community. Wally’s dedication to his community through Rotary was recognized when he received the Paul Harris Fellowship for exemplary service. Wally valued the outdoors. He put many miles on Happy Trails, and maintained beautiful gardens. He loved being with family and treasured any opportunity to spend time with those he loved. While holidays were always a special time to build memories, Wally was always sure to cherish the everyday moments. Helping family and friends with a project or sharing time with a grandchild and he was always quick to offer praise and support. Wally was a strong family man, respecting both past and future family ties. He believed in sharing his values with his children and grandchildren, as well as their friends, inspiring his values by example. He spoke to everyone, regardless of age or background, with respect and genuine interest, making anyone who crossed his path feel valued and connected. Wally is survived by his loving wife of 53 years, Adele; son Martin Kemp (Allison Miller); daughter Lori Kemp; grandchildren Naomi, Caden, Brennan and Elise as well as his extended family and many lifelong friends. Wally was predeceased by his parents Arthur and Dorothy; siblings Gavin and Frank. In lieu of flowers, the family requests that gifts be made to the High River United Church Inspirational Garden or the High River Hospital Foundation’s Palliative Care fund. A Memorial Service will be held on Wednesday, August 22nd at 1:00 p.m. at the High River United Church (123 Macleod Trail). To send condolences and view Wally’s Tribute Page please visit www.lylereeves.com . Caring for the family is Lyle Reeves Funerals of High River (Craig Snodgrass) 403.652.4242.

Mr. Wally Kemp of High River, AB, passed away on August 15, 2018 at the Rockyview General Hospital in Calgary at the age of 85 years. Born in Olds, AB in 1933, Wally was the youngest of three brothers. He moved to Lethbridge in his late... View Obituary & Service Information

The family of Mr. W.H. "Wally" Kemp created this Life Tributes page to make it easy to share your memories.