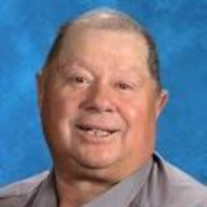 William Gordon Young, Jr. (Bill) of Cayley AB passed away peacefully October 24, 2021, at the High River Hospital at the age of 68. Bill was born July 5, 1953, in Prince Albert SK to Gordon and Lillian Young. The family moved to Cayley in August 1962 where Bill lived the rest of his life. He attended Cayley School, High River High School (Senator Riley), Mount Royal College, and the University of Calgary. He returned to his roots and taught school at Senator Riley and later Highwood High School. Since education and children were so important to him, after he retired from teaching, he served four years as a school board trustee. Bill met his future wife Karyle in 1980 and decided she was the one because she could make gravy out of anything. They married in 1983, and Bill became a husband and father by adopting Natasha and Amanda. The new YOUNG family lived on the same quarter section that Bill grew up on. He was a lot of things to a lot of people; a son, a brother, an uncle, a husband, a father, a grandfather, a farmer, a coach, a mentor, a teacher, and a friend. His passion was teaching and coaching. He believed in children becoming all they could be. He coached football - his first love, not to be outdone by wrestling - his true love; and girls rugby - a surprise love. He received numerous coaching awards including the Queens Medal in 1988 and the ASAA Coach of the Year Award in 2016 for his longstanding coaching career and his dedication to youth. As a farmer he took over the responsibilities of the family farm after his father passed away. Together Bill and his sister Sheila raised shorthorn cattle and made South Valley Stock Farm a well-known name in the cattle industry. He is survived by his wife Karyle, daughters Natasha Habing (John McManus) and Amanda Young (Roger Middleton), grandchildren Austin, Keiran, and Jenna Habing, sisters Sheila and Almina and her family, his sister Dorothy’s children, and a special cousin Dwight Young (Nancy) and their family, his in-laws Colin and Dana Valgardson, Chris and Lynn Valgardson, and Sandra Valgardson and their families. He was predeceased by his parents Gordon and Lilian, brother Barry Gordon, two sisters Margaret and Dorothy, his parents-in-law Doug and Phyllis, and his “son”-in-law, Reid Habing. A private family service will be held. In lieu of flowers, please consider the High River Community Cancer Centre- a truly remarkable place. In Bill’s honour, please hug your family and hold them close and try every day to make the world a better place by remembering all children matter all the time… they are our future. Caring for the family is Lyle Reeves Funerals of High River (Craig Snodgrass) 403-652-4242.

William Gordon Young, Jr. (Bill) of Cayley AB passed away peacefully October 24, 2021, at the High River Hospital at the age of 68. Bill was born July 5, 1953, in Prince Albert SK to Gordon and Lillian Young. The family moved to Cayley in August... View Obituary & Service Information

The family of Mr. William "Bill" Gordon Young created this Life Tributes page to make it easy to share your memories.