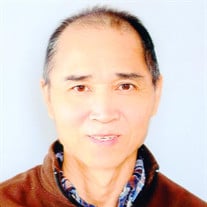 Surrounded by his family, Ron Ng passed away peacefully on February 14, 2020 at the High River Hospital. He was 58 years old. Ron is survived by his wife Joanne, son Milton, daughter Carmen, sister Eugenie, brother Chung (Lila), nephews Andy and Michael (Karen), and great niece Jenny. Ron was born in Po On, China and moved to Hong Kong with his family at a young age. He met his wife, Joanne, at Wong Shiu Chu, where he graduated high school. Together, they flew to Canada in 1989 and were married in Red Deer the next year. In 1993, Ron and Joanne celebrated the birth of their first son, Milton. Three years later, Ron graduated from the University of Alberta with a Bachelor of Commerce with Distinction. After graduating, Ron and his young family moved to High River, Alberta where they owned and managed the Canton Chinese Restaurant. Shortly after moving to High River, their second child, Carmen, was born. Ron and Joanne were busy for the next 12 years raising their two children and running their business, while becoming familiar friendly faces in the Town of High River. In 2008, Ron and Joanne decided to move on from their busy restaurant as it was becoming too tiring. Shortly after, Ron became the General Manager of the Greenway Hotel in Lacombe. During this time, Ron decided to complete the CPA exam and he was thrilled to have achieved his career destination by becoming a chartered accountant. During his time in Hong Kong, Ron loved to go fishing and play racquet sports including badminton, squash, and ping pong. He was also skilled at playing his guitar, which he had purchased with money earned from tutoring kids in school. After moving to Canada, he learned to golf in the summer and ski in the winter. In his later years, he could often be found playing pickleball at the Recreation Complex in High River. Otherwise, he was likely travelling anywhere he could to find his next great photo. Ron’s family would like to thank everyone who gave support during this past year, especially the pickleball community and High River Home Care. In memory of his passing, Ron’s family is asking for donations to be made to the Kids Cancer Care Foundation of Alberta to support families who are also fighting cancer (https://www.kidscancercare.ab.ca). A Celebration of Life Service took place on Saturday, February 22nd at the Lyle Reeves Funerals Atrium, 140 - 6th Avenue SW, High River, AB. Caring for the family is Lyle Reeves Funerals of High River (Craig Snodgrass) 403.652.4242.

The family of Mr. Yuk Yuen "Ron" Ng created this Life Tributes page to make it easy to share your memories.

Surrounded by his family, Ron Ng passed away peacefully on February...